Why were the greatest works accomplished in the 1860’s?

Now that I’ve read the synopses of Das Rheingold, Die Walküre, Siegfried, and Götterdämmerung, I have more context. I still want to watch the whole Ring Cycle for the leitmotifs, spectacle, and text. I don’t really appreciate classical opera’s orchestration of narrative texts, however. I prefer Andrew Lloyd Webber’s more melodic style of emoting.

Which brings us to 19th century romanticism. Das Rheingold opens the story with the very interesting question of what to desire. Love or power? Given the timing of the opera, could this be what 1860’s man faced in the industrial revolution? Perhaps he had had both before, and was forced to choose. Choosing technical power left men without chests, as Lewis famously characterized 20th century man.

This question could also be spun in a Christian context. Marriage or monasticism? Pleasure, or the power of God, albeit more humbly, but still forcefully begotten?

The Ring signifies the end of the gods. Paganism for atheism? Both of these choices, the desire for worldly power and atheism leave us in a colder and darker world. I want to listen to the music more attentively to see how Wagner orchestrates these developments. I believe it ends triumphantly, nevertheless. Not because the Gods are burned up,  but because what a magnificent blaze of glory it was. Does that glorify death too much? Maybe that’s why Hitler liked it.

Another Ring to rule them all

The reviews for the Metropolitan Opera’s production of Wagner’s The Ring Cycle were largely negative because of the “gargantuan” distraction of the set, dubbed, “The Machine”. If you missed the PBS broadcast of all 15 hours plus ‘the making of’ this week, here is a clip of The Machine in action. (or for pc, here)

The distraction was due to its slippery steepness which opera singers, unlike Cirque du Soleil performers, whom the set designer previously designed for, aren’t used to navigating. Everyone becomes nervous for them, including the director. 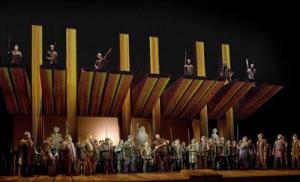 But I find the high tech projections upon the LCD screen type surface and it’s piano hammer movements pretty mesmerizing. I’m not that familiar with The Ring Cycle, except for the famous icon of the fat lady with Viking horns and breastplate, and the clips on the Excalibur soundtrack, and I probably wouldn’t have sat through the 3 or 4 hours I had occasion to make it through if it weren’t for the set. It was enough to make me want to study the plot more and perhaps listen to the whole thing some time. Since I haven’t yet, I won’t pursue what to make of the incestuous relationship in it.

I’ll instead mention our expectations of safety. It is ok to display controlled danger in entertainment. We can stand it as long as we know the actors and Atlanta aren’t really getting burned. We can also accept a margin of error concerning the safety of stuntmen, as long as no more than a few per 5 years or so don’t get killed or seriously injured. Stuntmen and gymnasts accept that risk. It’s in their contract. Unexpected accidents among the artists who are supposed to be protected is what makes us uncomfortable. But in this day and age where opera houses struggle to make it, can the artists afford to keep their prima donna safety net? Maybe they need to accept that in the modern techno, translate-to-the-small-screen world, they now have to be able to compete with indestructible computer generated images, or else start dubbing for them.