This NY Times quiz using a Harvard dialect study says that my use of colloquialisms come from Lubbock, Tx. I am not sure how this came about since the only place I’ve lived is in or near DFW metroplex, with the last half of my life in Weatherford, a little it west of there, but not near as west as Lubbock, which I’ve only drivin through twice and as an adult at that. For the quiz I chose words from my childhood where my memories are from Mesquite and Arlington. My friend, who I met in high school in the largely northern immigrated Arlington, grew up in Beaumont, but got cow-town Ft. Worth for her word origination. My parents both grew up in Louisiana, and their parents were from Mississippi and Arkansas. The only thing I can figure is that west Texas is where my heart lies. Growing up I loved westerns. I wanted a horse so bad, it was all I could think or dream of. Outdoor play was mimicking riding a horse. I suppose I mimicked cowboy language as well.

The best thing was pretending to ride about like the Lone Ranger through all that wilderness with surprises around every rock. The Big Bend area of Texas, and east of there along the Rio Grand, to the west side of the Pecos confluence, is very much like that. Judge Roy Bean, the law in those parts, is the symbol of home spun, but authoritative west Texas wisdom. East Texas is more associated with southern hierarchical formality. I’m more of a maverick and a renegade, despite my lineage.

How does this independent spirit fit in Orthodoxy? I’ll tell you it’s a struggle, and maybe why there is only one OCA mission west of I-35, which happens to be in Alpine, close to Big Bend. There are Greek and Antiochian Churches in the bigger cities however. Here’s an interesting web post from the Greek Church in San Angelo:

“An Eastern Orthodox Church may seem out-of-place in West Texas. The rough and tumble frontier heritage at first glance does not seem to fit very well with the ancient church of the east, Byzantium, and the ecumenical councils. Much about it may seem foreign and alien to Texans at first glance. But, that is only if we look at the surface.  In reality, deep down, where things matter most  they have more in common than one may realize.

The dry desert is where they both were born and where they grew up. They have passed through episodes of violence, privation and adversity which have become an integral part of their character. They hold fast to the ways of their fathers and, although they embrace new ways of doing things, they know deep down that the old ways are usually the best. They also know that the words we say do not mean nearly as much as what we do and how we live. Fiercely independent, they are also fiercely loyal and understand that they can accomplish more by working together than by working at odds with each other.

I remember one time while I was working as a utilization review nurse for an insurance company where we had to interview patients to determine medical necessity, there was this one older gentleman from the Lubbock area who could not understand my questions, until I slipped very easily into my west Texas inflections. Where you speak in the enthusiastic twangy upper register. How y’all do-in?! This was the same natural slip I made in Boston one time working as a receptionist that caused one of the uppity principals I had transferred a call to to call me back and just say, “‘okey dokey?'”. There is no life in the speech of northerners. Life makes them uncomfortable so you have to squelch it. This is also why they mainly wear black.

Back to Orthodoxy, it is indeed the desert fathers like St. Anthony and Mother Mary of Egypt that seem like “it” to me.

Work with what you’ve got

I have heard transgendered people say that they are being true to themselves by surgically and hormonally changing their bodies. My first opinion about this is that we are not our sexual orientation. Transgendered people will probably say that they didn’t so much do it because of who they are attracted to, because they probably don’t have any qualms about appearing hetero or homo sexual, but it seems that sexual relationships are usually involved in their sense of identity. Indeed in even homosexual relationships, each person seems to assume a masculine or feminine identity. There doesn’t seem to be a gender neutral (SNL’s Pat appears more masculine to me). If we are not our orientation, which does seem to be tied to our sense of our own gender, then does it follow that we are not our gender either? I don’t mean to prioritize gender so much, but a story about a transgendered person did make me start thinking about identity.

When the Bible says that there is no longer male or female, Jew nor Greek, I am lead to believe that gender is not the source of identity. Growing up with a Protestant, Christ only, view of Christianity, Christ has been the sole example of humanity, so one sort of has to ignore they are female when focusing on that. There are of course many gender distinctions in the Bible such as who can teach whom and so forth, but that can be somewhat separated from one’s spiritual aspirations. It is hard to come to terms with the Orthodox perspective of increased veneration of female Saints, but I’ll say even they are Christlike.

This is all to say that from the Christian (an identity that applies both to male and female) perspective, our gender is not who we are. With that I’ll not dispose of St. Maximus’ distinctions, but the distinctions are not as obvious as we may think. Male Saints can be praised for having certain female characteristics, perhaps gentleness, and vice versa. There are many hymns that praise female Saints for “manfully bearing …” too. Therefore I think that what men and women can properly do is pretty fluid.

Then we come to traditions. There are many cultural and Christian traditions that relegate what a man and woman can properly do as men and women. In the ’60’s these traditions where criticized and the social penalties for not conforming to them where thrown out the window. More recently, I think there has been a more tolerant view of traditional “options”. They have become a matter of aesthetic choice. A person is to be true to themselves, and some people may have a more fundamentalist makeup. I’ve even wondered if this is true. At bottom, I think everyone should choose to be traditionally Christian, but maybe that’s because I score very high in judging in that personality test. Good grief. I actually don’t feel all that traditional. I don’t like feeling boxed in. I love and respect the Orthodox traditions, but I’m a bit lenient sometimes.

Some people’s identity seems very linked to their occupation. I was watching a female classical xylophone player the other day, and was amazed at her precision, quickness, and attention to musical dynamics. To focus so much energy into becoming that proficient means that you have to totally believe in music. Your whole life has to become about music. While it was most impressive, I wonder if music is worth that much belief in it and its importance. Of all the disciplines, I probably would say that music is at the top of that list. I think it’s God’s language, but it’s not His only one. Jesus is called the Word, but did he sing the world into existence? I wonder. I think atoms are probably harmonically held together.

Men and women can harmonize together. Last night we heard the male Stretensky Monastery Choir perform in Dallas. It was beautiful and wonderful and transporting, but towards the end in the folk music section the conductor turned around and lead the Russians, who were many, in the audience in singing the chorus to a particular song, which they all knew. I think it was my favorite part of the whole concert. I was hungry for the higher, lighter registers, as much as I loved the lower ones up to that point. It’s nice to hear them in their individual settings, but I like variety.

In an old blog, in my profile I wrote, “I am what I like”. While what I like is important to my sense of self, asceticism is doing without things we like. Perhaps the ascetic likes asceticism more! But we don’t empty ourselves to be empty. We want to like Christ more.

Finishing part three (only in the mid 200’s of pages) of the hefty book, Father Seraphim, His Life and Works, inspires me to mark the occasion here. This book, along with the Church of the Nativity Prayer Book and the Holy Trinity Monastery Psalter I purchased at Holy Cross Monastery sat in my lap the whole way home from Pennsylvania while George drove. I did not want to set them on the floor of the car or pack them in the back. I read from each a little bit, but mainly I wanted them close to me. Saint John of San Francisco also feels close through the stories of him in this book as well as through the icons of him both at Holy Cross and more recently, at St. Maximus the Confessor Orthodox Church in Denton, Tx. We attended vigil there last Tuesday night in honor of the Church’s patron Saint, and I didn’t realize I was standing by St. John’s icon on the wall until I’d been there a little while. It was a very welcome surprise.

There are many stories of the intercessions of St. John of San Francisco.

Some have seen him standing at the Cathedral in San Francisco, Joy of All Who Sorrow, which houses his relics, during Liturgy. There was a couple at the Cathedral when we visited two summers ago who had attended the Orthodox school there, and told us how they would avoid walking the most direct way to the school because he would greet all the students on the sidewalk and ask them which Saint was commemorated that day. It was embarrassing not to know. I believe this man of most constant prayer while he was in his earthly body, is a fervent intercessor for the Church in America. I am so glad that St. Maximus Orthodox Church, OCA, venerates him when the OCA does not have him on all their official Saint commemorations. It’s considered too ROCOR I guess, as that was his jurisdiction.

Holy Saint John, pray for us.

Blessed Seraphim, pray for us. 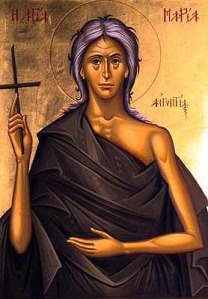 On another note, I recently purchased the Church of the Nativity’s Canon of St. Andrew CD’s which is a recording of their services the first week of Lent. I have finished the first three CD’s and was very struck by the chanting of the life of St. Mary of Egypt. I believe it includes the whole of St. Sophronius of Jerusalem’s account.

Holy Mother Mary of Egypt pray to God for us.

Most Holy Theotokos, pray to God for us.