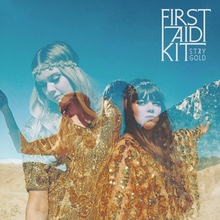 Since I like the 60’s folk/Indian sound of First Aid Kit, particularly Wolf

YouTube Red introduces me to more of their songs. Another one that intrigues me is “Emmylou”. My guess was that it referenced Emmylou Harris, Johnny Cash, and Judy Garland. I had no idea who Gram was though. Turns out there are a lot of surprises in the following explanation.

” First Aid Kit is a Swedish folk duo comprising sisters Johanna and Klara Söderberg, who hail from Enskede, a southern suburb of Stockholm. The teenaged siblings began composing songs in 2007, taking their name at random from an English dictionary. The following year their YouTube cover of the Fleet Foxes song “Tiger Mountain Peasant Song,” recorded when the younger sister Klara was just 15, spread their name rapidly on the Internet. Their debut album, The Big Black & The Blue was released on the London-based Wichita Records label in 2010 to largely positive reviews. This is a track from their second album The Lion’s Roar, which was produced by Bright Eyes guitarist Mike Mogis.

This song is a homage to two of the sisters’ favorite Country-Rock songwriting partnerships – Gram Parsons with Emmylou Harris, and Johnny Cash with June Carter. The Söderbergs told The Sun why they chose to sing about these two duos. They explained: “The artists we mention in ‘Emmylou’ are some of our all-time favourite singers and songwriters. They have inspired us endlessly and in a way this is a tribute to them. When they sing together it’s an otherworldly power. You can hear the love seeping through those vocals chords. The song is about the intimate connection you get when you sing together. Johnny and June were obviously married and although Emmylou and Gram never were an official couple there are certainly rumours. To us the song is saying: ‘We may not be able to be together, but at least we can sing together.'”

So after reading their explanation of Emmylou and Gram, I had to listen to the inspiration which led me to the other videos where his story unfolds.

How he met Emmylou Harris: https://youtu.be/BentUYX_OyA

His daughter on his life and influence: https://youtu.be/Fv7ovdcbud4

What happened to him: https://youtu.be/0MXn1zTNWN8

More details about his death https://youtu.be/Odh84BYSlmY

Now I’m ready to watch the video of “Emmylou”, which I hadn’t seen before. Spoiler Alert if you haven’t learned from the above links, “The song’s music video finds the two sisters wandering through Joshua Tree National Park, which is the alleged site of Parson’s cremation.”

Hey, they mention Stokholm, and it’s “June and” instead of Judy. I like Fleet Foxes too.